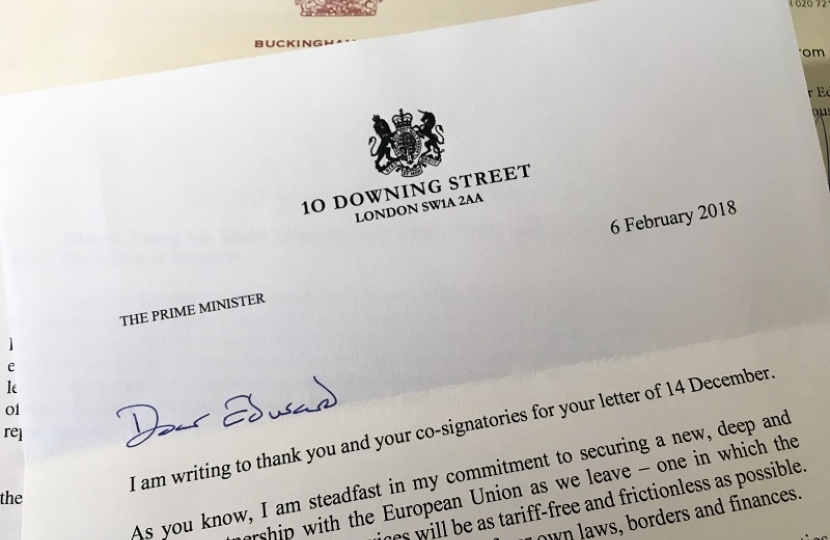 Prime Minister Theresa May has responded to a letter signed by Sir Edward Leigh and co-signed by ten other Conservative colleagues, asserting that the United Kingdom will indeed have left the European Union by 30 March 2019.

“As you know, I am steadfast in my commitment to securing a new, deep and special partnership with the European Union as we leave,” the Prime Minister wrote, “one in which the movement of goods and services will be as tariff-free and frictionless as possible. In that partnership we will be in control of our own laws, borders and finances.”

“By 30 March 2019, the UK will cease to be an EU Member State. The EU treaties will no longer apply and we will have left the Single Market and the Customs Union. We are currently seeking to agree a strictly time-limited implementation period during which our market access continues on current terms, so that businesses and people in the UK and EU have time to prepare for the new .arrangements.”

“I assure you,” she continued, “that I am focused on securing a good outcome in these negotiations, which I believe is in the interests of both sides. However, as I have said many times before, a responsible Government should prepare for all potential outcomes, which is exactly what we are doing.”

In their letter of support to the Prime Minister, Sir Edward and his co-signatories said that “Brexit must mean Brexit and must not be subverted.” They expressed gratitude for her assurances in the Commons that the United Kingdom would have full regulatory autonomy after Brexit. The MPs also asserted their full support for the Prime Minister in the event it proves impossible to reach a deal with the European Union.