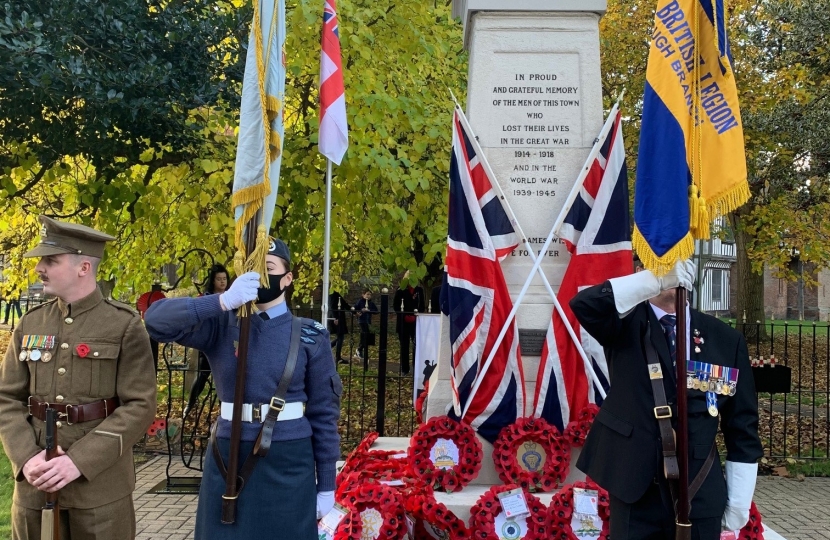 I was honoured to lay a wreath at the war memorial in Gainsborough this Remembrance Sunday. War memorials in churches and at the centre of villages across West Lindsey record the many names of those who fell in the First and Second World Wars. Many of the family names are still familiar ones in our communities, and there are few things more tragic than seeing many members of the same family together.

Every family made sacrifices during the wars, but some families made tremendous ones. I think particular of poor Mr and Mrs Arthur Tillett of Market Rasen, whose only son Lt John Edward Tillett served in the Lincolnshire Regiment and died just a month before the armistice in 1918. These older generations of survivors suffered with quiet dignity and founded Remembrance Day as a way to make sure these sacrifices would not be forgotten.

Conflict continues to this day in many parts of the world, and we are blessed with men and women who devote their lives to the defence of the realm. When they leave the services and reintegrate into civilian society they often have difficult lives coping with injuries and other problems. I was glad to join Cllr Tom Smith and army veteran Ian Bradley, both of the Armed Forces Community Advice Service which helps to support our veterans. We were celebrating the one hundredth anniversary of the founding of the Gainsborough branch of the Royal British Legion.

It is our duty to look after the welfare of our ex-servicemen which is why I welcomed the creation of the Office for Veterans’ Affairs in 2019. This government body helps to coordinate action supporting veterans, especially by tying together state efforts spanning mental and physical health, education, and employment amongst those who have served. The Ministry of Defence also works closely with the NHS and the various service charities like the RAF Benevolent Fund to ensure injured veterans have access to the care they need, and in the recent budget the Government injected an extra £5 million towards a variety of causes, including surgical research for amputees with blast injuries and new treatments for mental health issues.