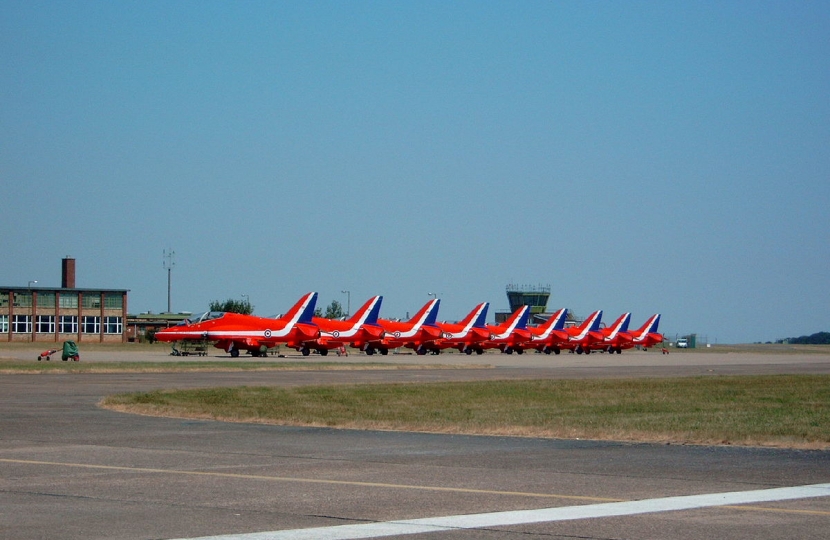 The Red Arrows are set to stay in their home county of Lincolnshire and move to RAF Waddington after the closure of their current base RAF Scampton. With their planned new headquarters a short distance away from their current home, the aerobatic team will still take to the skies above Scampton to practise their world-famous displays.

The Ministry of Defence will look at options for preserving the rich history of RAF Scampton after its closure. During the Second World War, the base was home to 617 Squadron which famously took part in the Dambusters raids in 1943.

A safety assessment deemed RAF Waddington to be the best possible home for The Red Arrows, and the relocation - which was first announced in 2018 - will now move into the assessment and planning stage.

The move forms part of the Ministry of Defence's plans to invest £4billing in its estate over the next decade, to meet military requirements with modern and efficient facilities and infrastructure.

“As we saw during the recent VE Day celebrations, the Red Arrows have a proud and prominent place in British culture and have long demonstrated the best of what the UK Armed Forces offer with their world-renowned skills, discipline and teamwork.

“It is good news that we have an excellent base for them at RAF Waddington, and I am delighted that they will be able to continue to practice their extraordinary aerobatic talents above RAF Scampton in their home county of Lincolnshire.”

“I am delighted that we now have confirmation that the Royal Air Force Aerobatics Team - The Red Arrows - will remain in the heart of Lincolnshire. The Royal Air Force remains committed to the strong links it has with the county and a considerable amount of work has been carried out to secure a suitable future home location.

“The Red Arrows are a highly skilled and professional team showcasing the very best of the British precision and leadership for industry on a global scale, and inspiring next generation interest in science, technology, engineering and mathematics through an air and space power lens. The announcement of this move will provide much needed stability for their future endeavours.”

“I have fought to keep the RAF’s aerobatic squadron, the Red Arrows, in our skies in Lincolnshire. I am pleased that they will continue to be based in bomber county. I am however saddened that their home at the historic RAF Scampton is to close as an RAF base.

“I know that both Lincolnshire County and West Lindsey District councils have been working closely with the Ministry of Defence to prepare for various eventualities and I will continue to support this partnership work as the closure of the base progresses.”

“I am very, very pleased that the Red Arrows are remaining in the county and we’ll continue see them practice in the big skies of Lincolnshire.

“I look forward to continuing to work with the district council and local MP to ensure we manage the closure of the base in a way that benefits local people. Now is the time for the MoD and BEIS to step up and help with planning for this future.”

“I have been working with my officers and colleagues from the county council in partnership with the Ministry of Defence. Sir Edward Leigh has been a key supporter of these efforts and I would like to thank him for his tireless efforts on our behalf.

“I am deeply disappointed that the decision has been taken to close RAF Scampton, whilst they Red Arrows, we are told, will continue to practice in our skies, they will not be based here.

“The impact of the closure of RAF Scampton is a significant disruption to the local economy and I fully expect West Lindsey District Council to play it’s part in building a bright future for the base beyond its closure. I would expect partnership working to continue with the Ministry of Defence and Lincolnshire County Council; but also increased participation from the Department for Business, Enterprise and Industrial Strategy and local stakeholders and residents.”

The team consists of nine pilots who fly in their trademark diamond display in BAE Systems’ Hawk Jets, reaching maximum speeds of 645 mph.

Lincolnshire to Receive an Extra £10,458,485 to Support Local Care Homes through the Coronavirus Pandemic

The Government has announced that Lincolnshire is to receive a share of a £600 million Infection Control Fund, launched to reduce the transmission of coronavirus on care homes.