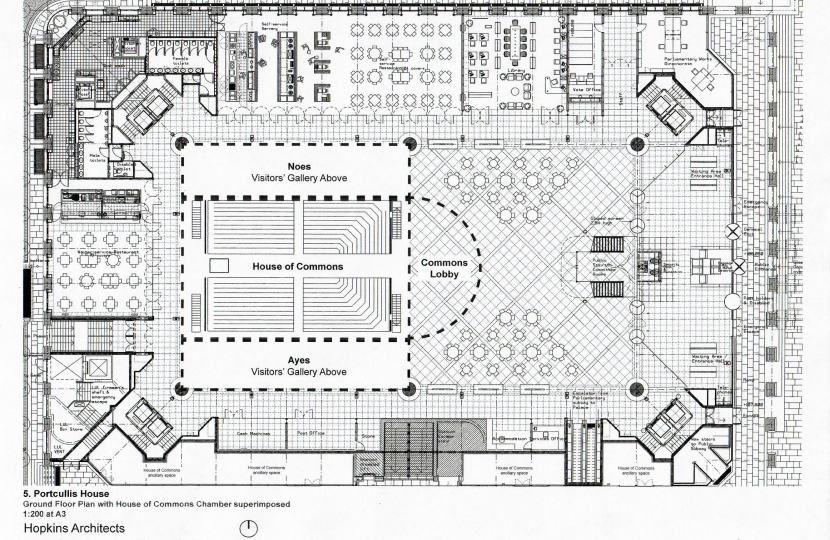 A new proposal for a temporary Commons chamber during renovations to the Palace of Westminster would be more environmentally friendly, better value for money, and make better use of the limited space at hand than the current plan of the Restoration & Renewal Programme.

The Restoration & Renewal Programme’s solution to this problem is to demolish Richmond House – a perfectly usable office building – retaining only its listed façade. This contravenes all environmental principles of the expected life cycle of a building that was completed only in 1987.

The Programme has also decided that the “temporary” chamber will be built to a permanent standard as a ‘legacy’ project – which will instantly become redundant once renovations to the Palace are completed.

Demolishing Richmond House to build a white elephant chamber that will only be used temporarily is environmentally unsound, financially irresponsible, and spatially wasteful.

Happily, there is a better proposal at hand. Sir Michael Hopkins CBE RA, the architect of Portcullis House, has pointed out that a full-sized temporary Commons chamber would fit into just half of the atrium of Portcullis House. Clerks’ offices and library facilities could be moved into Portcullis House alongside committee rooms while MPs are moved into the former Health Department offices in Richmond House.

Sir Michael’s plan is better value for money, more environmentally friendly, and makes better use of the limited space on the parliamentary estate during renovations to the Palace. Ever conscious of security concerns, Sir Michael has pointed out that Portcullis House was designed during the IRA bombing campaign, and the atrium has been built to resist a potential explosion in the Underground station below.

Meanwhile, the preservation group SAVE Britain’s Heritage are campaigning against the demolition of Richmond House on the grounds of its contribution to British architecture. The building’s architect, Sir William Whitfield, was described by a contemporary critic as “one of the most distinguished architects of his generation.” The building’s official listing description mentions that Richmond House has “a notable, monumental succession of principal internal spaces, unparalleled at the time in purpose-built post-war government offices.”

The proposal to demolish Richmond House has been attacked as “state-sponsored vandalism of the first order” by Marcus Binney, the executive president of SAVE. Their director, Henrietta Billings, has pointed out that the “potential environmental and cost savings from adapting Portcullis House, and re-opening Richmond House for office space rather than almost wholesale demolition and rebuilding are huge.”

It is our responsibility to prevent wasteful spending and useless ‘legacy’ projects while saddling future generations with the debt. I believe the more replica-like the temporary chamber is the more time we will be out of the Palace.

I am asking MPs to sign Early Day Motion 1919 calling on the government to abandon plans to demolish the perfectly usable Richmond House and instead to build a temporary chamber in the atrium of Portcullis House.

Lincolnshire to Receive an Extra £10,458,485 to Support Local Care Homes through the Coronavirus Pandemic

The Government has announced that Lincolnshire is to receive a share of a £600 million Infection Control Fund, launched to reduce the transmission of coronavirus on care homes.