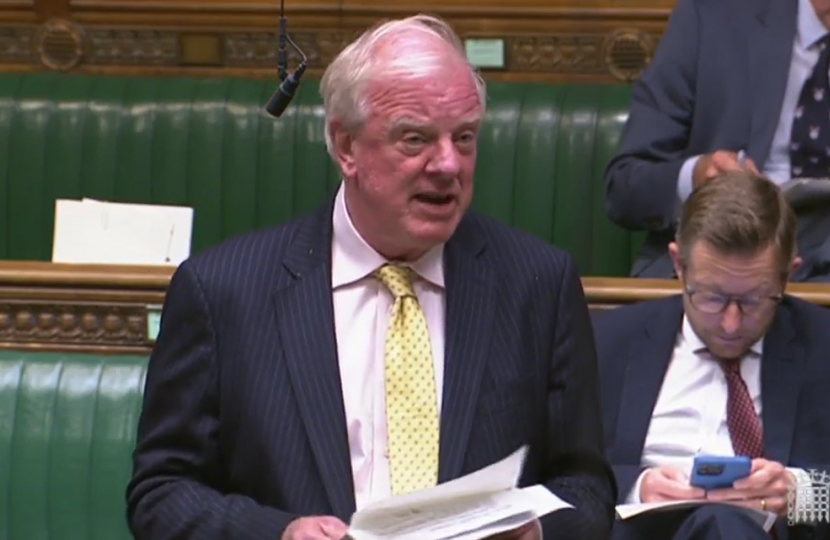 The video of Sir Edward's speech in the debate on the Queen's Speech can be found here with the full text below.

The hon. Member for Aberavon (Stephen Kinnock) attacks us for being the party of low growth, but this is the party that has presided over a situation where we have more people in employment than ever before. Unbelievably, the number of vacancies is higher than the number of those who are unemployed. But he is right—this is why I am going to follow the hon. Gentleman—to focus laser-like on what we are told to talk about today, although we are allowed to stray a bit during this Queen’s Speech debate, which is achieving economic growth. That is what the British people care about. In time, we can have an interesting debate about Channel 4 privatisation, about foie gras and about conversion therapy, but those are not the overwhelming priorities of the British people at the moment. What they are concerned about is the cost of living crisis.

There has never been an easier opportunity for the Opposition to attack the Government in terms of broad economic statistics, but that ignores the fact that when the last general election took place we could not possibly have predicted the impact of a global pandemic or, unbelievably, war in Europe as a result of the cruel tyrant Putin trying to recreate an old-style empire. I would argue that no Government since the second world war have faced greater challenges. I would also contend that, generally, the Opposition have failed to provide any substantial alternative policies that would have greatly alleviated the situation in regard to the war in Ukraine or the pandemic.

I am going to hold the Government to account, however. I want to hold them to account on the tax burden. Given that families are suffering and people are lying awake at night desperately searching for a way to pay their bills, and that we are in such a crisis, we have to move in a far more radical direction on the overall tax burden. I put that to the Chancellor of the Exchequer yesterday in Treasury questions, and I was quite pleased with his response when I urged him to make this a priority.

We are now facing the heaviest tax burden since the 1940s. Freezing income tax thresholds, combined with more inflation, will push many people into higher tax thresholds. Paul Johnson of the Institute for Fiscal Studies has said that

“almost all workers will be paying more tax on their earnings in 2025 than they would have been paying without this parliament’s reforms to income tax and NICs”.

The rise in inflation is projected to spark the biggest decline in living standards in any single financial year, so I follow the hon. Member for Aberavon in calling for radical policies. I am not against a windfall tax, but I am not sure that, on its own, it will make a great deal of difference after we have divided its receipts between every household in Britain. Frankly, the Chancellor has to come back to this House in time for the Budget, or preferably before, and introduce a cut in the overall tax burden.

I also want to talk about the housing crisis. If we are going to kick-start the economy and help our young people get into housing, we simply have to build much more housing. The number of dwellings where, according to building control figures, building work had started on the site was 41,600 in October to December 2021. That was a 3% decrease compared with the previous quarter and a 3% decrease compared with the same quarter of the previous year. The number of dwellings completed from October to December 2021 was 41,330, a 4% decrease on the previous quarter and an 11% decrease on the same quarter of the previous year. The fact is that this is a crisis.

I welcome that, through the Queen’s Speech, the Government are honestly attempting to find a way through the planning controls to get the housing we need, but we need a similar effort to the one we had after the second world war, when Harold Macmillan built 300,000 council houses a year. We have to see this as an absolute priority.

Although there has been great criticism of the Government’s handling of the Northern Ireland protocol, we have to unite this United Kingdom. We cannot have a situation in which there is no proper Government in Northern Ireland. The fact is that the DUP will not come back into government unless we address the protocol. I say to my hon. Friend the Member for Reigate (Crispin Blunt) that of course we want to respect international law, but we have to sort this out.

The issues we face are urgent and important. I am sure the Government are listening, and I urge them to address these issues as dramatically as they would address the issues following a world war. The effects of the pandemic and the war in Ukraine are so grave that we should all unite, with a sense of compassion, to help people who are suffering with this level of inflation, rising costs and rising taxation.