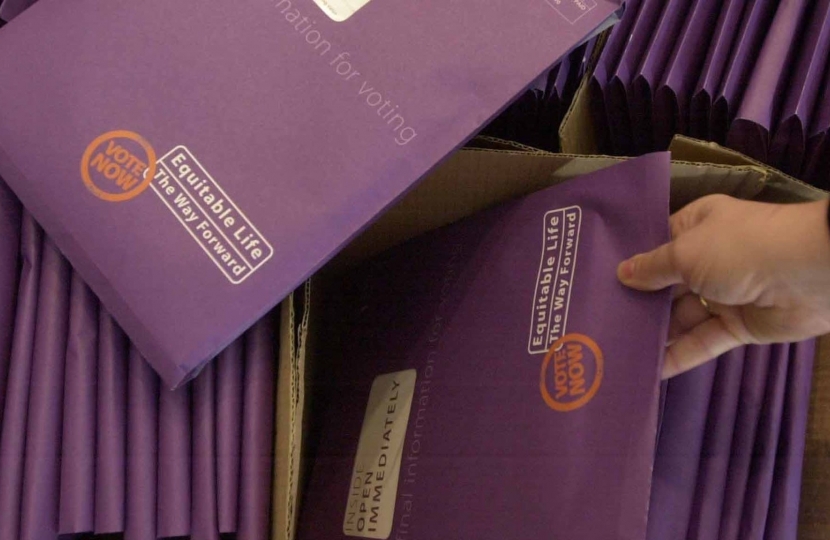 The Equitable Life scandal has turned into a saga – it’s now decades since the facts emerged. Those facts are well-known: dubious practices were rife at Equitable Life. There was, as Lord Penrose put it, a culture of “manipulation and concealment”. The FSA’s 2001 report from Ian Glick and Richard Snowden showed as much as did the Treasury’s 2004 report.

All of these showed lessons to be learned both in terms of corporate culture in financial services and in terms of the state’s role in overseeing the sector sufficiently. Everyone acknowledges the company was primarily at fault, but the State has a role in regulating financial services. All business today is conducted on the understanding that, ultimately, law and the state ensure an honest and transparent playing field.

It’s more than a decade since George Osbourne announced £1.5 billion in compensation to be paid. These payments were to begin in mid-July of 2011, but by the end of 2011 many of my affected constituents had not received a penny. Not only were there delays in payments but some payments were made to incorrect amounts – sometimes wildly inaccurate. These were caught not by the Treasury but by policyholders themselves. There’s also a lack of transparency on how policyholders can verify the amount they’ve been paid is correct. The Equitable Members Action Group (EMAG) has pointed out that there is “serious doubt over the accuracy and reliability of the methodology used by the Treasury to calculate what’s owed”. The Treasury insists there were no mistakes in methodology of determining payments but, if so, how can the Government explain inaccurate payments? 160 complaints of inaccuracy in payment were upheld, and yet EMAG reports only eight received recalculations. Ministers need to explain how this has happened.

Many hundreds of thousands of policyholders were affected by this scandal. The Government’s scheme offered only partial compensation. Full compensation would be expensive, with the unpaid balance of losses due to the 895,000 victims standing at £2.6 billion, without interest or uprating for inflation. If we sharpened our focus to the 9,000 most elderly and vulnerable holders of With-Profit Annuities (WPAs), excluded from the original payment scheme, it would cost £100 million. As EMAG have pointed out, £140 million of the originally allocated £1.5 billion remains unspent and could be released to cover these 9,000 WPA holders. Spreading it out over several years of the budget would soften the blow to the Exchequer.

We are not talking about corporate welfare or City bailouts. Most of the traced victims – 736,000 people – had under £20,000 in their pension pot. Many of these were hard-working people: Teachers, nurses, shop workers, owners of small businesses, postmen, civil servants, and many others

As a constituent of mine in Gainsborough told me:

“Having saved nearly all my life for a pension, I spent some of my redundancy money on a With Profit Annuity for my wife and myself.”

People need to save for their retirement. Living off your state pensions affords little comfort and most people do not realistically expect to be able to live off it. Very few young people today even think about their retirement yet many might find themselves forced to retire against their will when the time comes. And because of the improvements in health, they will live longer and have longer retirements. That sounds like a blessing but if they are not prepared it can be a burden.

As one of my Equitable Life constituents wrote to me a whole decade ago:

“No wonder many youngsters these days fight shy of providing for their own pensions. Given my time over again I would not do it.”

This is not a signal the Government wants to be sending to society, and especially to young people.

We accept the good faith of the Government for the past ten years. This is an extremely complicated and often thankless task. The Public Accounts Committee – of which I am a former chair – has investigated and expressed concern over the way the scheme has been administered.

“a series of independent reviews found that the governance structures set at the beginning of the Scheme were ineffective at dealing with changes to the requirements of the Scheme or responding to difficulties faced as part of its delivery.”

The scheme met its deadline of making first payments, but out of hundreds of thousands of people expecting compensation, the Treasury made only 224 payments in June 2011. Their goal of paying out £500 million by end of March 2012 was not met – only £168 million had been paid out by then. Even by the end of March the following year (2013), the Scheme had made 407,000 payments totalling £577 million. That still left 664,200 payments to make with a value of £370 million. It means many payments were made years after payments commenced.

The Treasury has also failed to work around data protection laws meaning they could not keep information on affected policyholders. They should have cooperated with Equitable Members Action Group in finding a solution to this but did not. A little creative thinking goes a long way to solving problems like these.

One constituent wrote to me:

“This is a matter of urgency. Equitable members are dying every day without reaping the benefit of their financial prudence during their working lives in preparation for their retirement.”

A constituent from Knaith wrote:

“Sadly my husband died four years ago [2006] without the assurance that the money he lost would ever be recompensed.”

Another from Welton wrote:

“I am 89 years old, now a widow. 25 years ago my husband and I prudently saved for our retirement using an Equitable Life pension scheme which accumulated to around £200,000 in order to have a comfortable retirement. These plans were wrecked after maladministration was uncovered in the company, reducing this figure overnight to £120,000 so the latter years of our lives have been filled with anxiety. Should I need to go into a home, the sums involved will be critically important.”

“I ask only that every effort is made to offer Equitable Life policy holders a fair and just deal which repays actual losses, since we were saving for the future in good faith in a government-regulated financial company.”

From Burton a gentleman wrote to me:

“As both my wife and I are 79 years old, we are two of those affected by governmental maladministration. Being financially poor it has made life much more of a struggle. Luxuries, such as a holiday, which we have not had for many years, are unattainable.”

All these letters are from ten years ago. A decade and a pandemic later, imagine how many have gone to their graves without proper compensation. Think too of the knock-on effect on the economy. Because they couldn’t access the funds they rightly saved for, many will have had to rely financially on adult children and relations. Money that should have been spent on the next generation – unfortunately but completely understandably – had to be spent on looking after our elders.

What has the Treasury done to try and solve this? An inquiry with clear terms of reference would benefit everyone. It would help the Treasury to function better, learn best practice, and deploy it. It would help Equitable policyholders to understand what has gone wrong and why. It would help Members of Parliament to be better informed as to the problems of delivering an important and expensive yet necessary scheme like this. It would help eliminate any inaccuracies or discrepancies in payment. EMAG has worked hard and has plentiful documentation on this

A joint inquiry would aid transparency and at least give policyholders – some of whom will still be out of pocket – some reassurance.