Letter to the Telegraph 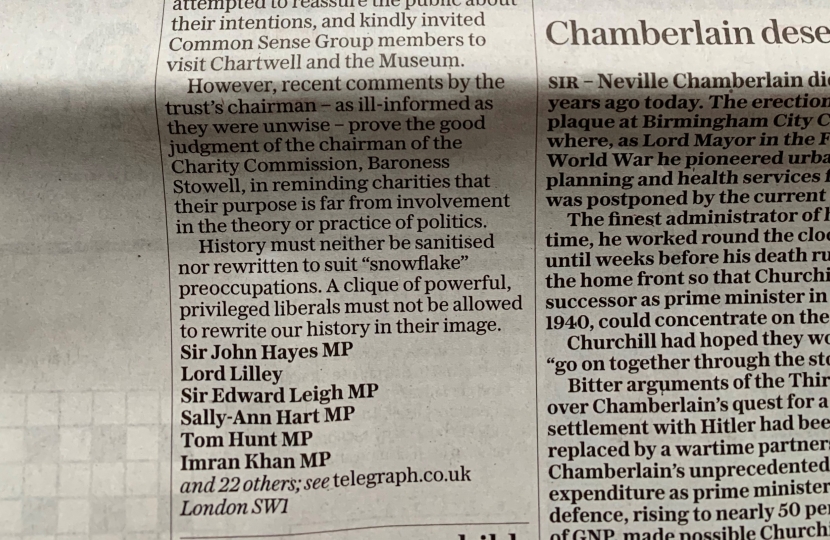 SIR – The Common Sense Group (59 Conservative MPs and seven peers) was formed to speak for the silent majority of voters tired of being patronised by elitist bourgeois liberals whenever issues such as immigration or law and order are raised.

Part of our mission is to ensure that institutional custodians of history and heritage, tasked with safeguarding and celebrating British values, are not coloured by cultural Marxist dogma, colloquially known as the “woke agenda”.

So, when National Trust directors implicitly tarnished one of Britain’s greatest sons, Winston Churchill, by linking his family home, Chartwell, with slavery and colonialism, 20 of the group wrote to the Culture Secretary requesting he review the trust’s funding applications to public bodies.

After revelations that the National Maritime Museum, guardian of Nelson’s Trafalgar coat (pierced by a bullet on Victory’s deck) would, in light of Black Lives Matter protests, portray “multiple perspectives on history” and thus review Nelson’s “heroic status”, our group challenged the museum’s CEO, Paddy Rodgers.

Subsequently, both the National Trust and Maritime Museum have attempted to reassure the public about their intentions, and kindly invited Common Sense Group members to visit Chartwell and the Museum.

However, recent comments by the trust’s chairman – as ill-informed as they were unwise – prove the good judgment of the chairman of the Charity Commission, Baroness Stowell, in reminding charities that their purpose is far from involvement in the theory or practice of politics.

History must neither be sanitised nor rewritten to suit “snowflake” preoccupations. A clique of powerful, privileged liberals must not be allowed to rewrite our history in their image.