Sir Ed: We've been proven right on restoring the Houses of Parliament 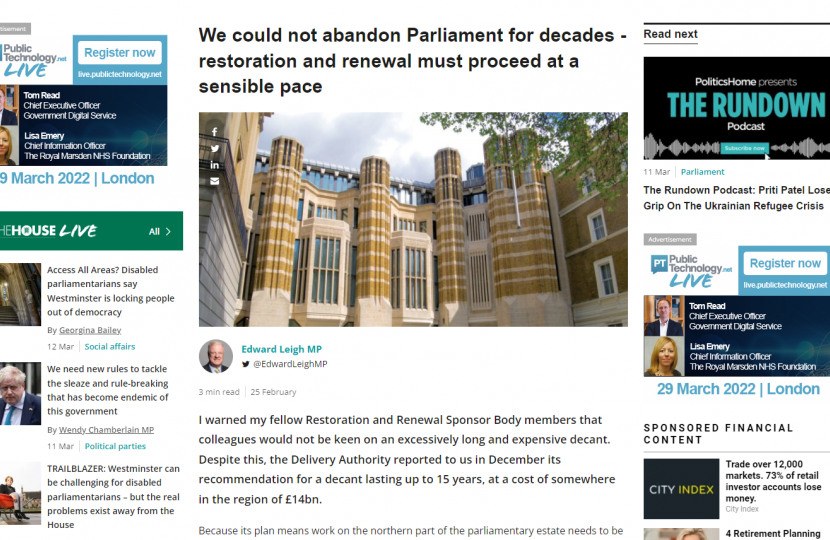 In The House magazine, MP warns risk of restoration becoming "a vast feeding frenzy at the expense of taxpayers" is enormous

I warned my fellow Restoration and Renewal Sponsor Body members that colleagues would not be keen on an excessively long and expensive decant. Despite this, the Delivery Authority reported to us in December its recommendation for a decant lasting up to 15 years, at a cost of somewhere in the region of £14bn.

Because its plan means work on the northern part of the parliamentary estate needs to be completed first, it is likely that work on the Palace of Westminster wouldn’t start until 2031.

Having served across two parliaments as chair of the Public Accounts Committee investigating waste in government spending, I was well used to consuming heavily detailed reports containing reams of information. Some of the papers presented to the Sponsor Body, however, were written in an advanced state of indecipherable management speak, accompanied by charts I would challenge anyone to discern the meaning of. The Sponsor Body’s ability to scrutinise the Delivery Authority was heavily impeded, and it was easy to get the impression that the emperor had no clothes.

Every single problem or challenge was answered with the most expensive and invasive solution possible, rather than exactly the kind of creative problem-solving a project of this scale and complexity requires. When it was discovered that the measurements of the Richmond House courtyard wouldn’t fit an exact footprint replica of the Commons chamber if the division lobbies with their oriel windows were included, the obvious common-sense response would be to chop off the bays and squeeze the division lobbies by the odd foot or two. MPs are used to putting up with a crowded lobby.

Instead, R&R proposed a drastic and costly solution: the Grade II*-listed Richmond House should be completely levelled except for its façade and an entirely new building put up in its place. Inexplicably, instead of a temporary chamber in an existing building, we would now have a chamber built to a permanent standard, demolishing a listed building forever to serve a merely temporary need.

The plans for the Palace were no better. It was proposed that 14 lifts would be removed, and that office space for MPs be cut by as much as one-fifth. Officials also seemed to have no idea how MPs’ offices actually work. Constituency casework and party politics both rely on discretion and privacy, but we were encouraged to adopt open-plan office space totally unsuitable to how we operate.

Horrified by these proposals and encouraged by the Speaker, the House of Commons Commission has taken matters in hand itself. It has recommended the Sponsor Body be abolished and significant works started as soon as possible around us. The Delivery Authority should be retained in a more streamlined form, and probably report to a subcommittee of the commissions of both houses.

Everything we have warned about for years has been proven correct. The decant was never going to be for just five years. Millions have been wasted exploring hugely ambitious proposals like demolishing Richmond House, making this Victorian palace carbon-neutral, filling glassed-over courtyards with offices, and so on. The risk of restoration becoming a vast feeding frenzy at the expense of taxpayers is enormous, and MPs are wise to resist a long and costly gold-plated decant.

We need to vote for a plan that takes back control and gets on with the essential work of making this building safe for the people who use it, and preserving the home of the Mother of Parliaments for future generations.